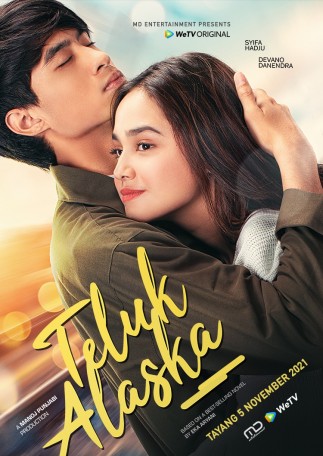 Jakarta, 3 November 2021 – PT MD Pictures Tbk (FILM) released the WeTV Original series “TELUK ALASKA”, which will air on November 5, 2021 on the WeTV and iflix platforms. The teen romance series, based on the novel by Eka Aryani, has sold 60,000 copies and has been read digitally by more than 65 million people. Under the direction of a young director Adhe Dharmastriya with a multi-talented star cast, Devano Danendra as Alister and Syifa Hadju as Ana, “Teluk Alaska” is expected to become a phenomenal series like other MD Pictures productions. This 8-episode series is also studded with talented young Indonesian stars including Taha Tolu, Fadi Alaydrus, Kaneishia Yusuf, Amara Sophie and Kathleen Carolyne.

Manoj Punjabi, Founder & CEO of MD Pictures, stated in a press conference, “Teenager drama fans will definitely want to meet Ana and Alister on the WeTV Original Gulf of Alaska. Teen drama series is a favorite, because it is rooted in the reality of everyday problems, so that the audience feels involved or close to the characters in the story. I believe the Gulf of Alaska will entertain viewers of all ages around the world.”

Lesley Simpson, Country Head of WeTV and iflix Indonesia said “WeTV Original Teluk Alaska is the series that viewers have been waiting for. Many comments from netizens who can’t wait to watch Teluk Alaska. Seeing the enthusiasm of netizens like that, we are even more motivated to continue to provide the best content,”

Alister actor Devano Danendra said he was grateful and thanked WeTV for being trusted to play Alister, “I am very grateful and at the same time grateful to MD and WeTV for providing the opportunity to be involved in the Gulf of Alaska. Now, for those of you who can’t wait, Teluk Alaska can already be watched on WeTV starting on November 5, 2021, right!” Devano said.

Ana never thought that she would meet Alister, her childhood friend who had been separated for a long time. Now, they both study at the same school. Even more surprising, Alister did not recognize Ana at all. For Ana, Alister has changed her attitude to be cold, very different from the Alister she used to know. Alister’s presence at the school apparently gets the attention of Tasya, the school’s Queen Bee who is the perpetrator of bullying against Ana along with her followers, Iqbal, as well as Cindy and her boyfriend, Andra.

Devano is not only involved as the main character, in this series Devano also fills the OST – Original Soundtrack of the Gulf of Alaska, with a song titled ‘Teenagers’, which of course is inspired by the series “Teluk Alaska””. On the other hand, Devano is also directly involved in songwriting with MD Music Indonesia and is assisted by other great musicians. The song, which is packaged very fresh and contemporary, is also more beautiful with the guitar instrument.

As a childhood friend, Ana tries to get closer to Alister. Various ways and efforts were tried. On the other hand, Tasya, who increasingly dislikes Ana, tries to justify all events to vent her frustration with Ana. Luckily, Ana still has Bulan, the principal’s son, who is her best friend.

Alister and Ana must face Tasya’s cunning efforts and overcome a more difficult obstacle, namely the blessing of their parents. Slowly, the truth of the past began to unfold. They believe that being together will only cause them to hurt each other. Ana realizes her relationship with Alister will always be like Teluk Alaska, where two different oceans collide that can never unite.

Since mid-2020, PT MD Pictures Tbk (FILM) has achieved success by releasing several high-quality digital series and feature films that directly greet viewers online. MD Pictures made the biggest collaboration with the WeTV and iflix platforms, by launching more than 130 of the best MD Pictures films along with several exclusive series, including several phenomenal drama series that went viral and occupied the popularity charts from the beginning to the end of their broadcast “My Lecturer My Husband”, “Kisah Untuk Geri”, “Satu Amin Dua Iman”, “Antares” and “Cinta Fitri”. Even in the 4th Quarter, after releasing “Teluk Alaska”, MD Pictures will re-release several other series titles on WeTV and iflix.

MD Pictures is the largest media software company in Indonesia and the only national film company listed on the Indonesia Stock Exchange (IDX) to date with the code FILM. With an integrated system and state-of-the-art facilities that cover the entire production chain, MD Pictures is always ready to entertain, educate and inspire audiences, and become a pioneer in the Indonesian film industry through innovation and collaboration to produce high-value film products.